Letter of Invitation for Syriac conference 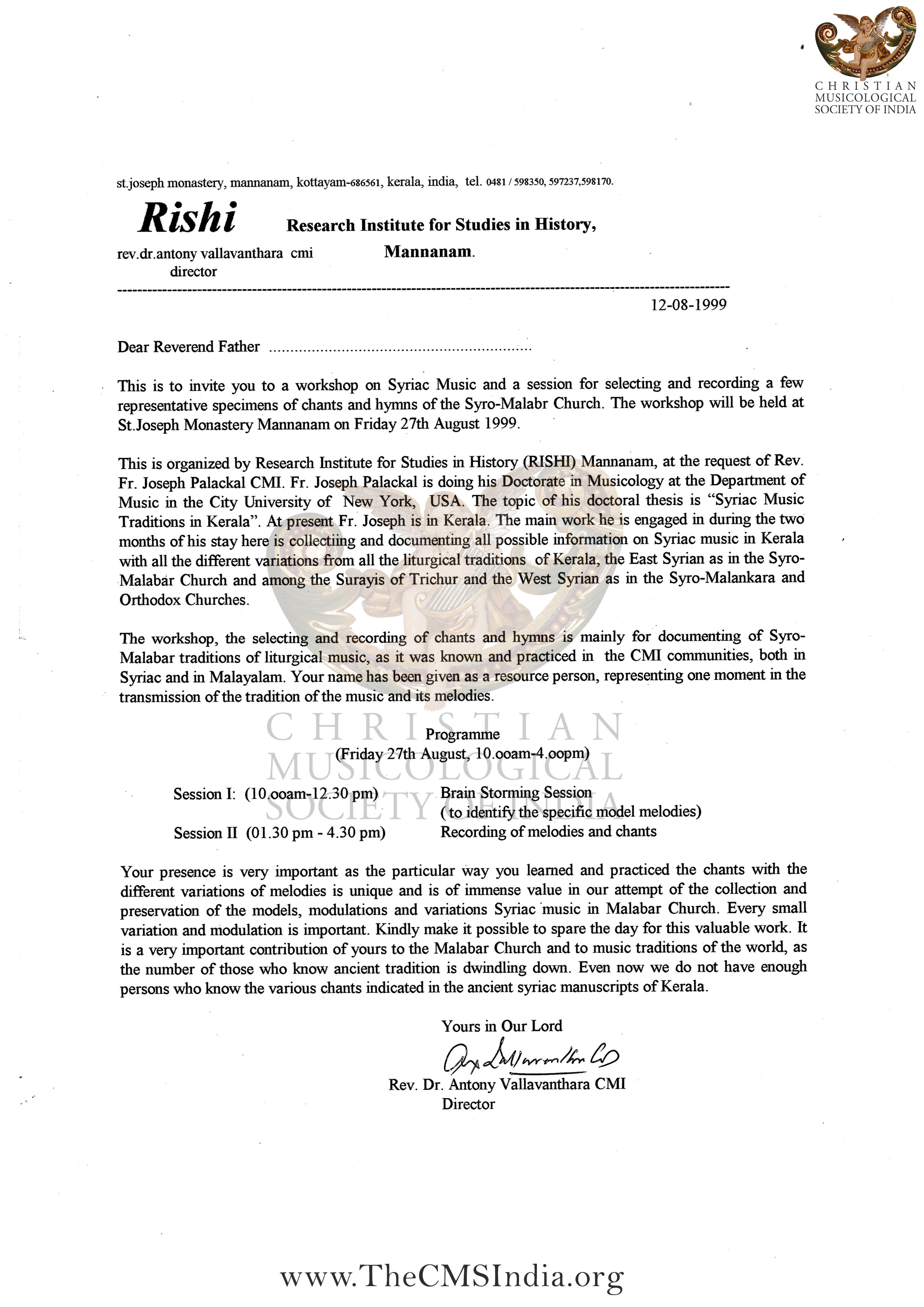 This letter of invitation for the Syriac Conference at St. Joseph’s Monastery at Mannanam, on 27 August 1999, is a remarkable document; the conference was in preparation for an audio recording of a selection of melodies from the Syriac music repertory of the Syro Malabar Church. The recording took place at the Monastery chapel, where these melodies reverberated on a daily basis from the middle of the 19th century until 1962. The recording would eventually be published as a CD by PAN records in Netherlands, under the title "Qambel Maran: Syriac Chants from South India,” in 2002. The CD became a landmark in the history of Christian music in India. This happened to be the first commercial release of Syriac chants from the East Syriac tradition of the Syro Malabar Church. Surprisingly, the CD became a commercial success, went into three reprints, and found a place in many libraries around the world. After spending a few hours of discussions, Fr. Antony Vallavanthara, CMI (1942-2008), who was a zealous promoter of the Syriac heritage, drafted the letter, which was sent to a selected group of CMI priests who were either Syriac scholars or singers. The participants included such significant personalities as Fr. Abel Periyappuram, CMI (1920-2001) and Fr. Emmanuel Thelly (1925-2015), CMI. The purpose of the conference was to determine which melodies should be recorded. An audio recording of this workshop has survived; it will be posted later. Contrary to my expectation, the participants were very enthusiastic and the discussions were vibrant. The closing paragraph in the letter is noteworthy. Though not a musician, Fr. Vallavanthara, a specialist in the history of the Syro Malabar liturgy , writes like a musicologist; he refers to many musical aspects of the Syriac tradition, including the importance of individual and regional variations of the same melody. Fr. Vallavanthara's words to the prospective participants are remarkable: "It is a very important contribution of yours to the Malabar Church and to "music traditions of the world." Those words were prophetic. May his soul rest in peace, and may he continue to intercede for the success of the Aramaic Project.