(Malayalam, Solemn Stations of the Cross)

(Songs and prayers for the fourteen Stations of the Cross in Malayalam First edition, 1929) 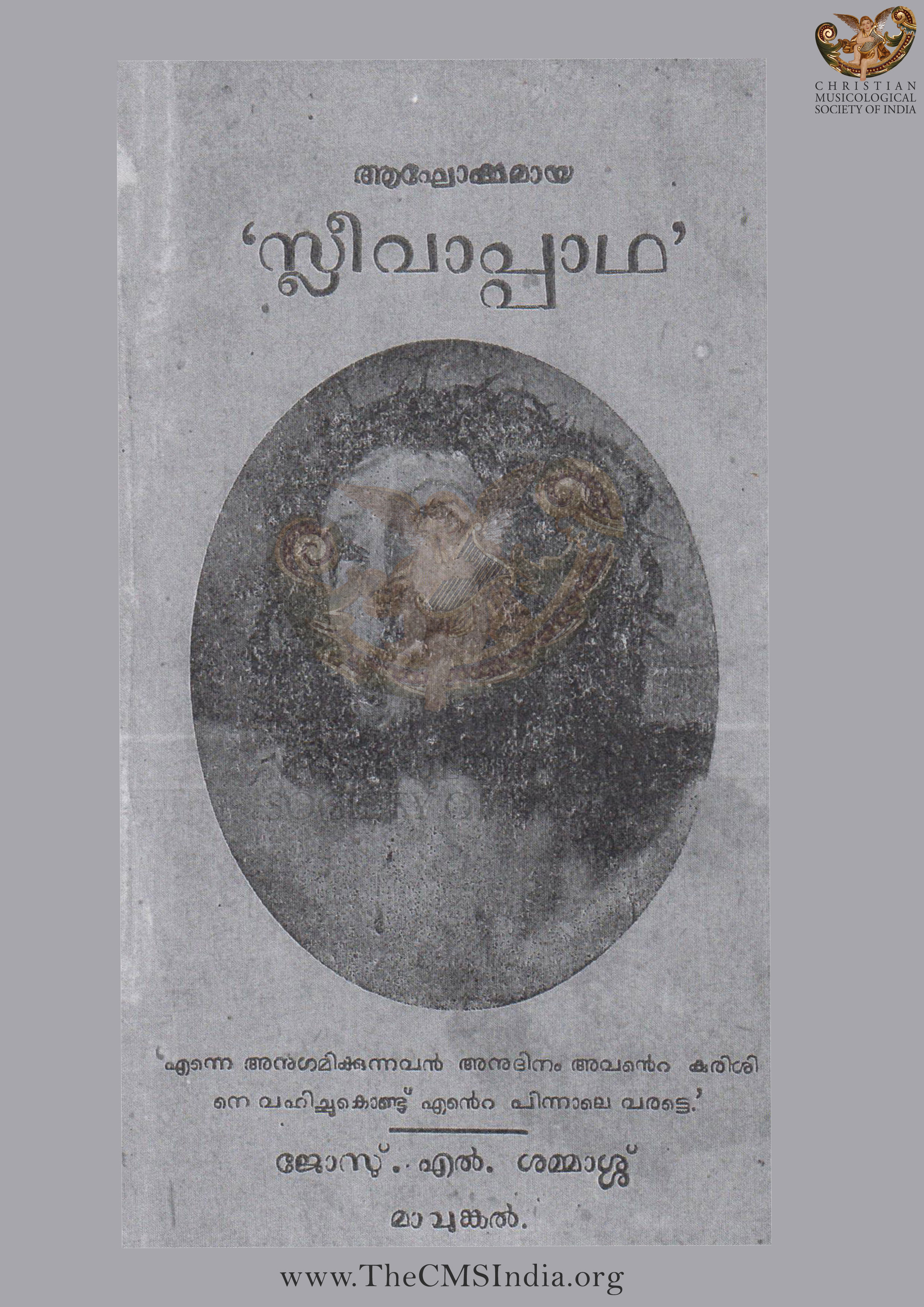 This is the original edition (1929) of one of the most popular versions of the Stations of the Cross in Malayalam. The 32-page booklet (6.4” X 3.8”) contains hymns, prayers, and meditative reflections on each of the fourteen Stations, written by late Fr. Joseph Mawunkal, a member of the Arch-diocese of Ernakulam-Angamaly, in Kerala. At the time of publication, the author was a seminarian, identified as Jose L. Mawunkal, at Puthenpally, Varappuzha. The work received a warm reception from the Catholic Keralites because of its high literary and poetic qualities. Until the 1970s, this was the most popular Stations of the Cross among the Syro Malabar and the Latin Catholics in Kerala. Even today, several communities continue to use this version, with slight change of words in the opening stanza. The words kṛūšum thāngi-pōya took the place of kḷēšāwaha- māya, and fit well into the melody. Fr. Mawunkal composed the lyrics to the meter and melody of two songs that were already popular among the Catholics in Kerala: Dēwēšā yēšuparā or īšoyē enpithāwē. The opening words of these songs are indicated above the first stanza,in brackets. It is possible that these two songs were modelled after popular Hindi movie songs. Writing lyrics to popular melodies from Hindi movies was prevalent until the 1960s. See many more examples in another Malayalam hymnal, Dhaṛmagīti (see no. 13 under Resources for Researchers) The title of the booklet deserves attention. It is a combination of the Syriac word slīwā (Cross) and the Malayalam word pātha (way) according to the rules of the Malayalam syntax. Although Syriac literacy was already on the path of decline among the laity in the first quarter of the twentieth century, many Syriac words remained in the vernacular prayer vocabulary. More importantly, the centuries-long presence of the Syriac language in the region created the comfort level of the Syriac Christians in formulating phrases that combined Syriac and Malayalam words. This is but one example. The advertisements that appear on the back cover will be of much interest to the historians of Malayalam hymnals and prayer vocabulary in Kerala. The first advertisement is for a Malayalam book that contains prayers and songs for the popular devotion of Eucharistic adoration, one hour adoration on the first Fridays of the month as well as forty-hour adoration once a year, in parishes.The advertisement specifically mentions the Syriac and Malayalam versions of the songs for the Benediction of the Blessed Sacrament. These songs are given in the Malayalam script. It is interesting to know that this book included also Latin chants (Pange Lingua, Tantum Ergo) in the Malayalam script. Personally, I have a vague recollection of my aunt (father’s sister) singing Tantum Ergo from this book at the end of our family prayer. It means that the Syriac Christians were quite comfortable in singing Latin chants (at home) that the Portuguese missionaries introduced in Kerala. We do not know yet if the Latin chants were ever sung in Syro Malabar churches.The second advertisement is for a three-part hymnal that the author edited: Bhakthagānamālika (Garland of Devotional Songs). Part III consists of 73 songs,probably written by Fr. Mawunkal, and Part I was going for a second edition, according to the advertisement. The booklet is also a contemporary witness to the numeric literacy of the Keralites. The page numbers appear in Arabic numerals, whereas the number of the Stations and stanzas appear in the Malayalam numerals. During this transitional period, the Keralites were familiar with both systems of writing the numerals.The Malayalam numerals went out of vogue in the second half of the twentieth century. So, too, the price is given in the name of the local currency (chakṛam and aṇa; later this changed to rūpa and paisa). I hope future researchers will be successful in locating the books that are mentioned on the back cover; they are primary source materials for the musical aspect of the religio-cultural history of Kerala.