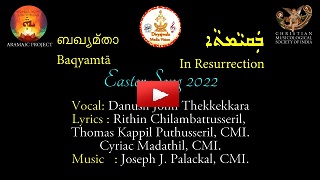 When we posted the Easter song 2022, Baqyamta, we could not imagine the song would get so much attention from different parts of the world. Here is a video that Bro. Danush Jomi Thekkekkara made by singing to the minus track that we published in Aramaic Project-275 A. Bro. Danush posted it on the Diwya Jwala Media vision that belongs to the Kothamangalam Diocese in Kerala. Danush added new visuals to the song. In spite of the incorrect rendering of the melody in the last line of the song, the video received far greater number of hits than the original video. We are glad to see that this newly composed (both text and melody) Easter song is slowly becoming a part of the Syriac music repertory of the Syro Malabar Church. We hope this song will inspire other seminarians to venture into writing and composing new chants in Syriac. In any case, the conversation on the Syriac heritage of Kerala is catching on among the youngsters in the Syro Malabar Church.

From Bengaluru, India to New York and Houston, USA to Kothamangalam in Kerala India, the story of the song is linked to different regions and communities. We shall keep tracking the history of the song in the coming years.

The statistical analysis of YouTube channel data shows that there is an audience for our channel in the United Arab Emirates. That is a comforting piece of news. It is an indication of a reversal of history of the flow of the Syriac tradition into Kerala from the Middle East for centuries.